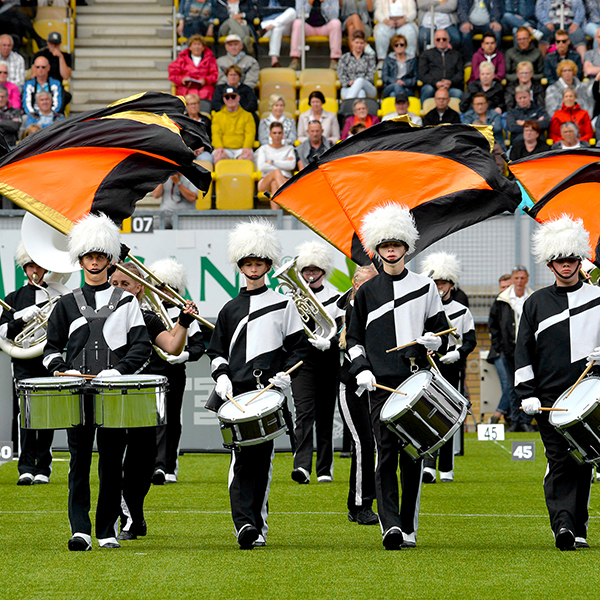 In 1997 the World Music Contest stood at the cradle of the development of this contest form for Marching and Show Bands. The Marching Parade is characterized by the performance of a complete show production within the 'limitations' of the street course of the marching contests; a circuit marked out on the field.

Unlike marching, the marching parade is less focused on military precision and more on creativity. This competition form is unique in the world and was developed to give the audience on all sides of the stadium a surprising and spectacular experience. Besides musicality and choreography, the entertainment value is particularly important: a must-see!

Unlike the previous editions, the marching parade contest in 2022 no longer have a test piece. The Marching Parade is performed on a fixed street course. The choice of music, route, directions, formations, steps, tempi, etc. are free of choice, but will stay within the lines of the street parade. These choices have an effect on all parts to be judged and must be appropriate for the division in which the band is participating. At the end of the performance the band will come to a halt.

Participation in the Marching Parade is possible in two divisions:

The marching, show and marching parade contests take place in the Parkstad Limburg Stadium. This stadium, which can accommodate some 20,000 visitors, is home to the Roda JC football club. During the World Music Contest it is the setting for the marching and show contests for four weeks. The stadium is about a 10-minute drive from the center of Kerkrade and is easily accessible by car and public transport.